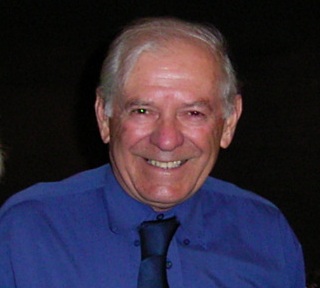 Mark Hronsky is a sculptor and artist who lives in Perth, Western Australia. He arrived in Australia as a fifteen year old immigrant in 1950 and subsequently spent many years living and working in the rural and outback parts of Western Australia. These experiences, particularly those of the mining industry and those hardy prospectors who first opened up new areas, have strongly influenced the themes of his work. Mark has developed an unique method of metal sculpture, based on oxy-acetylene welding,  which has evolved into his signature artistic style. 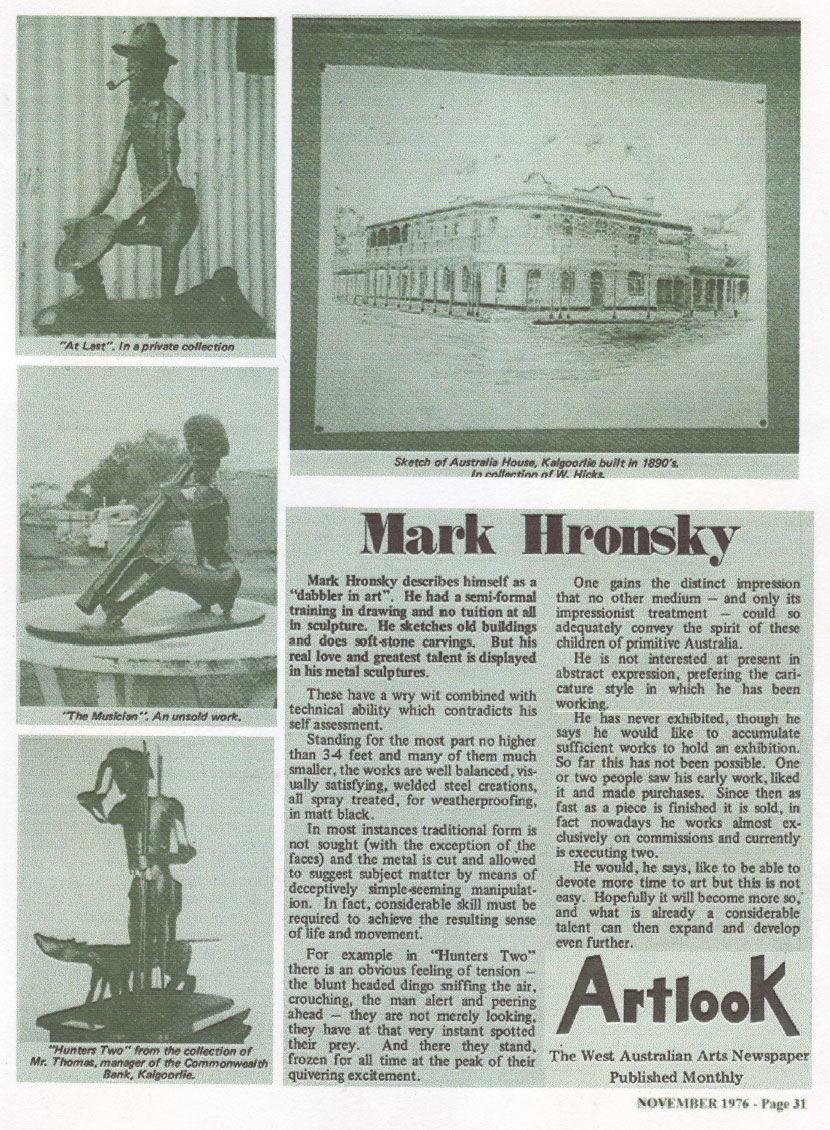 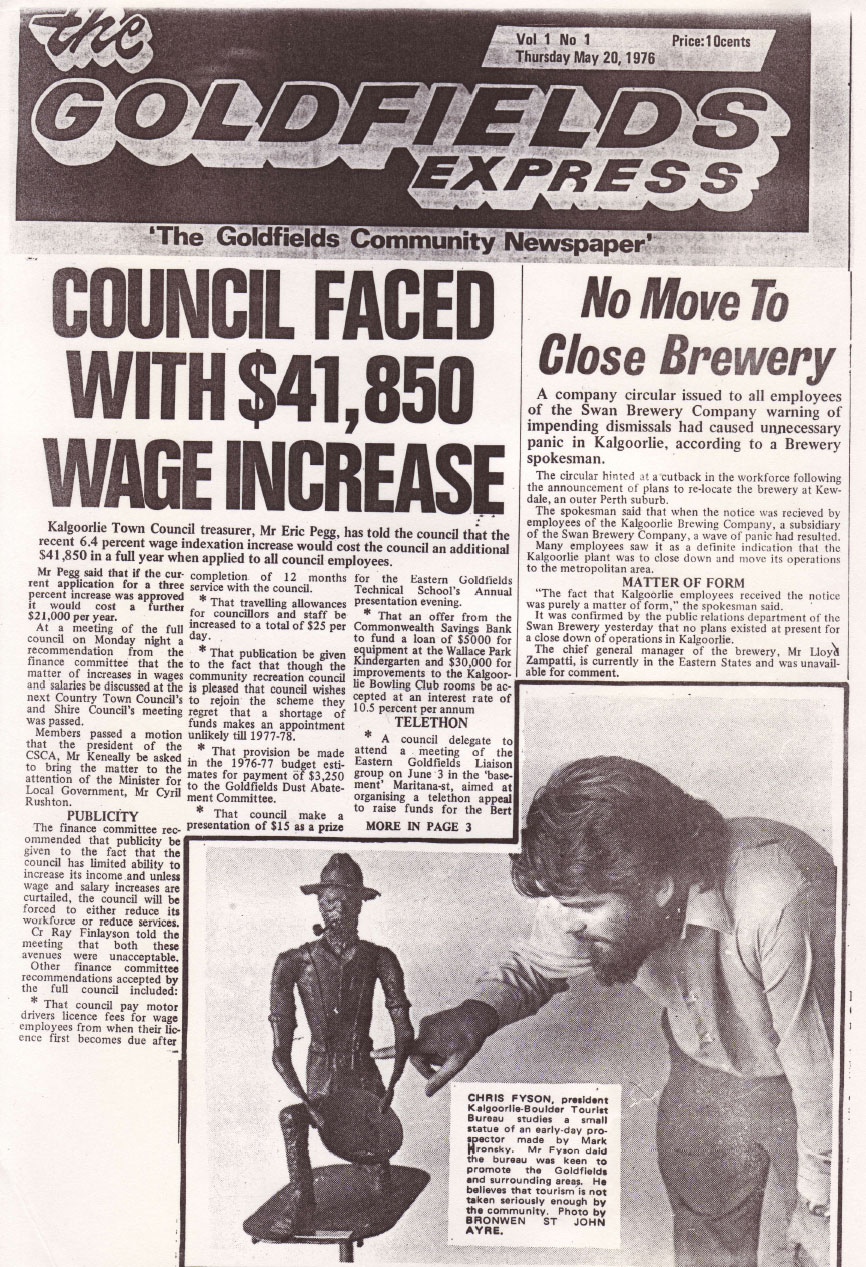 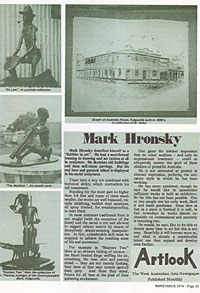 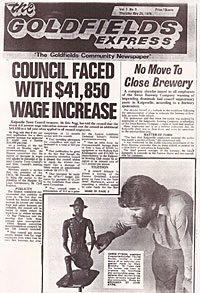 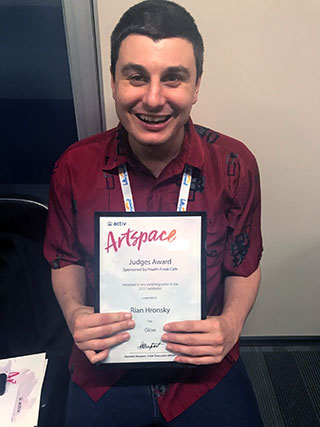 Rian won the Judges Award at the 2017 ACTIV art exhibition for his work “Glow”. This is the top award given at this exhibition and it was presented to him by the Governor of Western Australia, Her Excellency, Kerry Sanderson.

(written by his mother) 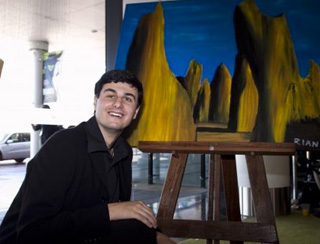 Rian is 32 years old and, oftentimes, he is defined by his autism. He is unable to speak, has auditory processing difficulties, and finds it very difficult to understand abstract concepts. He also has epilepsy. His life, up to now, has been pretty much focused on what he CAN’T do.

Until several years ago, Rian’s greatest artistic achievement consisted pretty much of being able to draw a recognizable stick person. Whenever he brought an example of this home, it was treated with dutiful acclaim, but was pretty much consigned to the rubbish bin (who needs more than five or six drawings of a stick person?).

We moved to Port Hedland, and the wonderful Disability Services Commission Local Area Coordinator up there, who constantly used to organize diverse activities for her charges, suggested group art classes. To say we were highly dubious about it all puts an exaggeratedly positive slant on the way we viewed this. Let’s face it, Ri’s art was dodgy – and he hated it. If you insisted he drew something he would, but in a begrudging “let’s get it out of the way” manner.

But, instead of a bit of paper and some coloured pencils, Rian was offered large canvases and real paint. Instead of being asked to create things because of some imagined huge internal desire to express himself, the pressure of which, quite frankly, distressed him immensely, he was offered models to work from.

These early lessons actually took place in the very delightful Courthouse Gallery in Port Hedland. Under these conditions, Rian blossomed and genuinely started looking forward to art. He sold several paintings and entered the Hedland art awards where he also sold his work.

Soon after, local artists David Hooper and Linda Walker began painting with Rian, allowing him one-on-one tutelage for his art. Rian held his first solo exhibition at the C3 Gallery, and sold 11 pieces. In the 2010 Hedland Art Awards, Rian won a Highly Commended prize, and shook the hands of many people who came up to congratulate him, who were as bemused at his inability to speak (and autism) as he was about all the fuss that was going on around him.

In October of 2011, Rian co-exhibited his art with the extraordinarily talented (and kind and patient) David Hooper, at the Courthouse Gallery. He sold another five pieces. Whilst Rian just accepts all these events, I am amazed, and grateful, that people take his art into their home, and make it part of their lives.

We have now moved to Perth, where Rian has continued to improve his art. I confess, Rian does not seem to be a fan of some precise school of art, focusing on the minutae of things he sees, but seems to be able to intertwine bold colours to make something that jumps out at you (and not always in a scary way, now) in a style that is much more vibrant than the original picture. His perspective and subsequent interpretation of subjects is often grander and more riveting than the original, and seems to be a very bold take on life for him, as, in other instances, he is very meticulous and careful not to make errors, requires much reassurance, and is frequently passive and totally disinterested.

I hope Rian’s art brings some pleasure to those who see it. It makes us smile, just knowing how very far he’s come.